CANCEL THIS SHOW!! This is buffoonery and explotation of our children!! Enough is enough!! 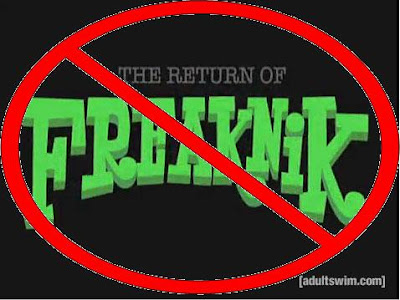 As a black mother of five beautiful children, four of them girls, I am outraged by the buffoonery and exploitation of T-Pain’s The Return of Freaknik Cartoon on the Cartoon Network. My childen LOVE the Cartoon Network and watch many of their favorite shows like SpongeBob, but how dare the network give the green light to such an ignorant, classless and tacky cartoon like The Return of Freaknik?
The cartoon premiered on March 7 and is full of profanity, rife with weed-rolling, and encourages a lifestyle of being pimps, promoting drugs, getting money, and calling women hoes and bitches while priding themselves with living with their mommas in dilapidated neighborhoods.

The kids in the cartoon are on a crusade to bring Freaknik back to Atlanta. Freaknik is an annual meeting in Atlanta, Georgia, primarily of students from historically black colleges and universities. But it has turned into an unofficial gathering where non-college students come to party, drink, cut-up and cause havoc in the ATL.

I saw the cartoon and I am furious. I am furious because it was us black people, who brought this idea to cartoon network as if it was Ok and commonplace in our community. It was T-Pain, but what can we expect from a man who parades around in clown costumes, big hats, gold-teeth and a chalice full of liquor.

As a mother of five, I will not stand for this. Today I am calling for the CANCELLATION of the cartoon Freaknik on Cartoon Network and ask for all of you to support me in this crusade by joining the facebook group THE OFFICIAL MOTHERS AGAINST T-PAIN’S FREAKNIK CARTOON ON CARTOON NETWORK! http://www.facebook.com/home.php?#!/group.php?gid=360068066819

Our youth are impressionable and are being negatively programmed now by Cartoon Network- a station that us mothers thought was a safe-haven.

I teach my children better and strive to be a positive example in their life everyday. As an author I made sure that I wrote a book that has positive images of a black family with a mom AND dad and children who lived in a home. That’s the life I live and I want my children to know that’s the life they can live as well. We have an obligation as a community to put pressure of those who THINK they can exploit us and our children while we sit idly by and do nothing but go get our hair and nails done.

We are NOT a people who only care about the latest clothes and fresh-new sneakers!! We are a diverse people, educated people, ambitious people, who LOVE our children and do not appreciate the negative images you perpetrate upon us! How dare you? We are not stupid or blind! Do Cartoon Network think we care more about cars, champagne and gold chains than we do about our kids?

Yes, when I was a child I watched some things that may have been looked at as non-sense but never at this level. They insult our women like it’s ok to be called a bitch or a hoe and flash your ass like it’s the key to getting ahead. There is no excuse for this. How many people sat in the meeting at Cartoon Network with T-Pain and actually approved this? What were they thinking. By approving this cartoon it is sure-fire proof of their attitude against the black community. They don’t think we are worth a damn. And they surely don’t think we give a damn about our kids or our community. This is a frightening reality. Whatever some blacks do in their lives to perpetuate these images does not exempt the REST OF US from the responsibility of helping the younger generations make good choices and from being positive examples for them.

I am hurt and saddened by what I see in this cartoon. Yes, it is a reality that some of our children are lost and hurting and that some schools are out of control. But it is not a problem just solely in our community. I am going to use my resources and do whatever I can to turn the tables on this negative portrayal of MY people.

We are NOT all about money, power, and material gain! We want the same attrative cartoon images for our children like white people have with Barbie and the Latino community with Dora. The behaviors portrayed in Freaknik are appalling. The guys pride themselves with having bling and they aspire to be rappers so they don’t have to do anything else in life, as one character stated in the cartoon.

Sadly, black people are at the bottom of every economic category in this country. And instead of trying to uplift our children we attack them through this cartoon by giving them nothingness to asborb into their minds with these indelible images that are brainwashing them.

Our youth need help and this fodder fuels the fire of ignorance. We are not going to sit by and compain. We are taking action. Today we are taking steps to shut-down this cartoon and I will be working to organize a protest in downtown Atlanta at the Turner building which broadcasts the Cartoon Network!

Join the fight and do your community good. Enough is enough. Let’s stand for SOMETHING for our children!

O Yeah! It’s On! Oprah’s in the A! And she’s breathing life into all of us by helping to guide us into Living Our Best ...

Breakfast with Santa at Woodruff is Sweet, Whimsical and Well Worth it!

From the moment you walk into the Woodruff Arts Center to have Breakfast with old St. Nick, you are wowed by the Christmasy and whimsical ...

In all my 37 years of life, there’s only one person (maybe two) who, to me, can even come close to giving off high-voltage energy ...