A hard lesson learned for being too soft 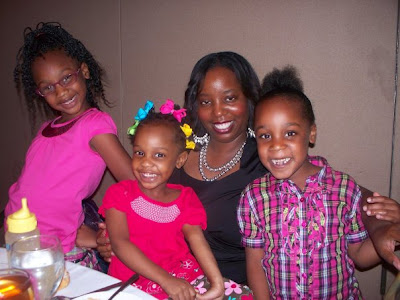 Raising kids is hard. I love the job. But it’s even harder for the kids–I guess. They have to follow SO MANY rules that maybe they just crack under pressure. And in this case–It’s PEER PRESSURE that my daughter cracked under!
Yesterday I had to discipline Kaitlin and teach her a valuable lesson that could save her life later. DON’T LET PEOPLE IN THE HO– USE WITHOUT MY KNOWLEDGE!!

On yesterday, Kaitlin let a little boy from next door in the house.
I was upstairs.
Kaitlin came upstairs and told me he was in the house.
I told Kaitlin to tell him he had to leave because she was doing homework.
She went back downstairs and told him (I thought).
30 minutes later Jo-Jo starts screaming like crazy!
Mikaela brings Jo-Jo upstairs and says the boy slammed the back door on Jo-Jo.
I said, “how could he slam a door when I told kaitlin to tell him to leave 30 minutes ago?”
I go downstairs and the boy is still in my house!
I tell him to leave and go home.
I asked Kaitlin what happened.
She said the boy wouldn’t leave the house. Mind you this boy is younger and smaller than her.
I told her it’s HER HO– USE and don’t ever let someone tell you what to do in your house and she should have told me he wouldn’t leave and she should not have let him just stay in my house without my knowledge!
Lesson learned — Don’t EVER let anyone in my house without my knowledge!
Kaitlin got in trouble! She knows better!
End result…Jo-Jo has a swollen hand — which I though was fractured — from being slammed in the back door by the little boy who should not have been in my house in the first place!
I went next door and told the little boy’s grandma and she said, “He’s gonna get a whuppin!”
Had this little boy picked up a knife or injured himself in my home, I would have been in a WORLD of trouble when I didn’t even know he was STILL in my house.

Kaitlin was being soft and she let someone else rule her in her own home. I’m not having that. I wanted her to know for one, never let anyone on our home and also if something like that happens you always have to TELL mommy!

This was seriously about safety. Now I know that my kids know better. And I can’t risk this happening again. What if Kaitlin would have let in a serial murderer. Then what would everyone have to say then? Well if she don’t know, NOW SHE KNOWS!!

So I called two of my daughters, Mikaela and Kaitlin, over to my laptop and told them I wanted them to watch something. I didn’t ...

When God Sends Angels to Help…

There’s no doubt it has been a major undertaking starting a non-profit organization. There’s a lot of work involved, loads of paperwork to maintain and ...

It’s been a long road and sometimes it’s been rough. But through all the ups and downs she came out on top. My oldest daughter ...

OK, so as a tribute to my already spoiled kids, I have decided to start Family Night. Now, I am by no means the perfect ...