Passing Cornbread as Cupcakes! Only in America! 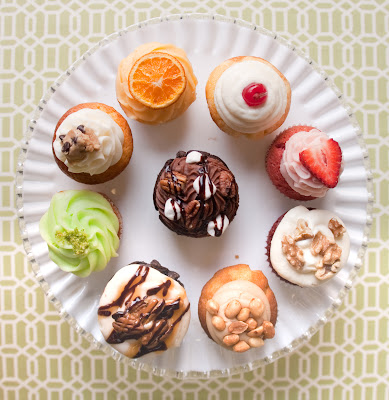 Dear Miss Mamie:
Let’s agree on one thing: there’s a big difference between a cupcake and cornbread. Can we agree on that?
Well yesterday I was craving a really good cupcake. You know, the kind of cupcake that melts in your mouth like the pound of butter that was put in it. So I decided to take a ride to historic Marietta Square to visit a place called Cupcake Charm. I visited last year and absolutely fell head over heels in love with the most delectable cupcakes I ever tasted. Ahhh…thinking about them now just makes my mouth water.
BUT to my surprise, when I got to Cupcake Charm, it wasn’t there! BUG EYES Instead the store had new ownership and is now named Miss Mamie’s, Cupcakes Cakes and Such. The place had the cutest cupcake décor. And the cupcakes were cute and looked good. I picked out 6 of them and paid a $12 for my box. I was so ready to dig in. But when I bit into one of the cupcakes I couldn’t believe what I tasted… PURE CORNBREAD. NOT A CUPCAKE!
The picture above is deceiving to me. Because the cupcakes look good, but they truly don’t deliver.
My sister and I were pretty upset about these little cupcakes. For one, WHAT HAPPENED? Why didn’t they taste like cupcakes? So I had to get to the bottom of this.
I decided to call up Miss Mamie for some answers. I spoke to co-owner Ross Doyle, who explained why these cupcakes tasted so different from what I was expecting.
For one, Ross said that the previous owner used “box” cake-mix infused with Crisco to make up her cupcake concoction. The new owners instead use more wholesome ingredients made from scratch.
“A small percentage of people don’t like cake from scratch but we’re not planning on going back,” Ross said. He admits that I was not the first person to say that I didn’t like the new recipe and he swears that the mix is certainly not cornbread.
BUT IT SURELY TASTES LIKE IT!
I have eaten enough cornbread growing up with a country grandmomma to know cornbread. But anyway Ross says, “We’re proud of our product. We do something different here.” And in all fairness, everything is not for everybody, I must admit.
But here’s the deal Miss Mamie, I think you are so blinded by your French way of making pastry (having graduated from Le Cordon Bleu) that you can’t see things through. Domino’s pizza thought their pizza was great until people stop buying the crap. Then they went back to the drawing board and got a new recipe for TRADITIONAL PIZZA that people loved. People want traditional cupcakes. You can make them homemade but your current homemade recipe is TRULY awful.
I wanted so very bad to love your pretty little cupcakes, but I don’t. I can’t. My mouth is just so against it. If I eat your cornbread cupcakes, then I’ll need some fried fish and hot-sauce to help them go down.
Why would you break something that wasn’t broken? Huh? WHYYY!
If people really have their mouth set for a sweet, traditional cupcake, then that’s what they want. here’s the bottom line.
1. Your cupcakes taste like CORNBREAD, CORN MUFFINS and CORN BISCUITS!
2. I understand you have a family recipe and want a signature taste, but signature taste or not it tastes like a corn bread.
3. You are in the south! Sweet Home Central! Don’t get a cupcake shop and advertise it as American cupcakes and its Not American cupcakes! (French pastry my foot!)
Basically, on this path, Miss Mamie’s will be short-lived. People are not going to keep ordering really bad, but nicely decorated corn muffins!

Want to feel cleaner and fresher? Who doesn’t?! Give @Cottonelle a try with this coupon! #sp #LetsTalkBums

I spend a lot of time in my bathroom. Whether it’s taking selfies (because you know the bathroom is the new IT place) or applying ...

I would consider myself as having a family that adores Disney and a Disney fanatic, of sorts. Not a fanatic in the sense that I ...

When my kids grow up, I want their memories of me to be great ones. That’s why I try to be a great mom. I’m ...