cincomom September 23, 2010 Comments Off on Eddie Long’s ordeal just brought to light what’s been going on in the dark at MANY churches 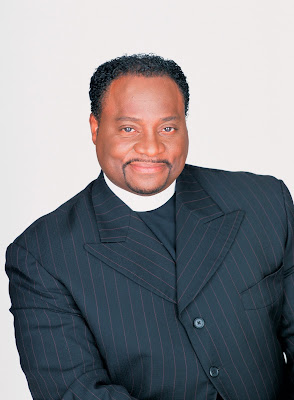 What’s happening to Eddie Long is no surprise to me. I have dealt with a lot of pastors on a professional and personal matter for many years. But I’ll get to that in a minute. But this whole situation takes me back to the early 1990s when I attended a church, the Rev. there was accused of an inappropriate relationship with a man.

It almost made the news. Almost. The news cameras came out to the church and tried to talk to members and I was someone they talked to. I stood by my pastor and professed on camera that he was a good man and people were just jealous of his influence and outreach in the community. I did what I was expected to do. I blindly followed a “man” instead of looking at the facts of the matter. He was married with two children and upstanding in the community. Who would ever believe that he could do so wrong? Well, it was true what he did. But what he did was not against the law. He had a homosexual relationship with another adult.

Though not against the law, his morals and judgment were definitely in question. The lies and deceit was enough to start a firestorm in the church and I truly mean firestorm. I was there when members jumped in his face, they screamed and shouted (and not the kind of shouting inspired by the Holy Spirit). It got truly ugly. But that pastor survived the storm. He still preaches and leads a large congregation at that same church today.
Now living in Atlanta, I am watching another pastor fall from grace. Three young men have alleged that they had sexual relationships with a well-known pastor Bishop Eddie Long of New Birth Missionary Baptist Church in Lithonia Georgia. In this case, lawsuits have been filed against Long and his church. The men say Long enticed them with lavish gifts like cars and clothes, expensive jewelry and trips abroad to Turks & Caicos, New Zealand and NY, Ohio and Connecticut. The men were 17-18 and are now 21 and have come forward. They have said Long encouraged them to call him daddy and paid for their tuition to attend private school.

What he has done sounds fine except for the fact the men go on to say that they had sex with long. They rubbed his body down with lotions and oils and they even got busy in the church pews. He would use Scripture to justify his actions. These allegations have sent Greater Atlanta into ablaze. Long is very influential here. He is one of few pastors in the world with a congregation of 30,000+ members of a mega church. But the alleged incidents happened when the men were 16. Two of the men have criminal records and tried to break into a safe at the church earlier this year because they were upset that long had started sexual relationships with other men. There are a lot of shocking allegations in the lawsuit that I don’t even feel like getting into. But I will say this: watching the news I was appalled by all the members who said they did not and could not believe the allegations. They said they stood by their pastor. Can you say, “Brainwashed”? I surely was brainwashed when I said the same thing back when my pastor was being accused. Why is it that we are so committed to our pastors as if they are God themselves? He is not God– he is a man. A MAN. A man who is lustful and has the same wants, needs and desires as anyone else. Just because his role is to teach the Bible does not place him above anyone else. But for some reason, people will blindly follow a pastor and believe he could do no wrong because he is so good at what he does. We have to stop putting all our stock in man and separate the man from the God. We have to learn to listen to the word, but to a degree where we can pluck out the bull that he’s inserting in an effort to lay guilt on people so they will follow them blindly and then they get away with murder like this. In the Eddie Long lawsuit, the young men also allege that some church members knew exactly what was going down at the church and opted to do nothing. That’s pretty much how cults are run.
It seems these Word-faith pastors no longer preach the virtues of struggle, sacrifice, or redemptive suffering, instead exhorting the poor to “get right” with God by accumulating capital for themselves.

To ensure that the people pay it, many New Black Church pastors are beginning to ask their members to bring in tax returns to guarantee appropriate tithing. Others request that members submit their entire checks and allow the church to manage their finances in order to certify that they are appropriately sharing God’s grace with their spiritual shepherds. Can anyone say Suge Knight? 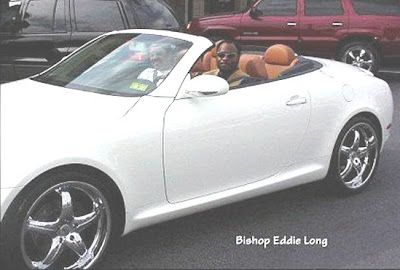 Of course these examples are not typical of all pastors, but then again, it is typical of all pastors—can you say Catholic Church? The bottom line is, just know that going to church is not gonna get you to heaven. You can read your Bible at home. Start a home study group. Discuss the Bible with your friends. I don’t see the value in Mega-church pastors who drive Bentleys. Why? What’s the point in following them? There are too many people at the church for him to notice and help you anyway? It’s funny how Jehovah Witnesses never pass a plate. You could put a $1 into a box every week at the Hall and they couldn’t care less. It’s between you and your God. Why can’t all churches be run this way? Hmmm…. Guess those dollars wouldn’t add up enough each week to make the Bentley payments and pay for vacations abroad. Hmmm…. That’s funny. Jesus traveled everywhere on foot and traveled up to mountaintop where he was nailed to a cross. How do we go from teaching that to lavish vacations on money from the members?
SMDH

Celebrating #CincoDeMayo with family and ‘Delicioso’ recipes from @SimplyIngrid #CokeFiesta.

Cincomom is celebrating Cinco De Mayo! May 5th is not only about the richness, beauty and tradition of Mexican families, but it also symbolizes Mexican ...

Cincomom Sews! How I Found My Happy!

*Exhale* My life is hectic. It just is. Between dealing with my kids, trying to be attentive to each and every one of them and ...