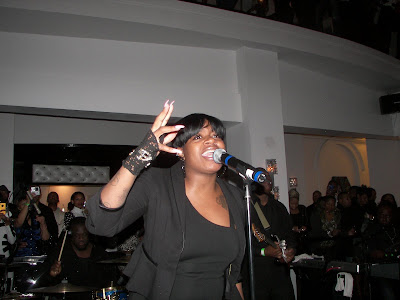 Atlanta– By Kia Morgan Smith -The soulful, shoe-kicking, belly-busting American Idol, Fantasia Barrino says you won’t see her at this year’s 53rd Annual Grammy Awards next Sunday. She’s stepping out of her shoes -again- to take a stand for what she calls “soulful” artists who seldom get a Grammy nod, and will boycott the Grammy’s this year.
Last night at an intimate concert performance at the Museum Bar in Atlanta for its grand opening, Fantasia told a packed crowd that she’s not going to the awards ceremony. “You gotta stand for something,” she said. She went on to say that the Grammys don’t acknowledge “soulful” performers and she’s had enough of it.
And even though Fantasia nearly dominates the R&B field along with John Legend and Chris Brown, with chart topping songs and the Billboard R&B/Hip Hop Songs top 10 single “Bittersweet” she said she will watch the ceremony from afar.
Fantasia is nominated for Best Female R&B Vocal Performance and Best R&B Song.
Fantasia didn’t go into specifics as to what soulful singers the Grammys have failed to acknowledge.
During the awards ceremony Fantasia said she will be home crafting her own music, writing and singing and I’m sure kicking off and kicking up her high heels.
The 53rd Annual GRAMMY Awards will take place in Los Angeles at Staples Center on Sunday, Feb. 13, 2011, and will air live on the CBS Television Network.

I’m a gladiator loving, action adventure seeking, vampire slashing kinda girl. So it was a normal night for me to take a step out of ...