In Case You Missed It: The J Crew Conversation: Thoughtful Dialogue Took a Downturn!

cincomom April 15, 2011 Comments Off on In Case You Missed It: The J Crew Conversation: Thoughtful Dialogue Took a Downturn!

Boy did I start some ish.
Yesterday I wrote a story about an ad which depicts a mom painting her son’s toenails pink and the story ran on a website called mybrownbaby.com. Click here. I often post to MBB, the site of Author Denene Millner. It’s a new fresh website that encourages thoughful dialogue.
But damn, I never, ever even thought that my post would be the talk of the town and receive such ugly, hateful and yes, ignorant comments that truly left me reeling.
Primarily the comments were made by women, some were rather ignorant and uninformed women who missed the point. I talked to one woman, a writer, on twitter and Denene’s website, who just kept putting me down and making ignorant statements about my writing and how aggresive it was. I went to her blog and revealed how sloppy her writing was. In fact it seems she was making comments trying to boost her blog and get exposure! Sad.
Another woman who kept making dumb comments was even blasted by Denene after she went in on Denene’s husband Nick.
Nick, an award-winning writer, put the whole thing in perspective from a male’s point of view. Nick stated that he must be in some alternate universe because it was pretty much crazy that these women were making these off-handed comments and attacking me. The were likely the same women WHO KNOW they dream of having a masculine male in their lives for the long term.
There were many more crazy comments as you can go and see for yourself. Most comments are truly laughable though.
I think the problem was that people who read my post clearly missed the point- big time.
Some folks even called me a bigot. Yeah, a bigot of all things. What’s even more ignorant about that is that they obviously didn’t understand the definition of a bigot because if so they would know for a fact that I am not one.
I am reposting the article below, but before I do, let me say this.
I never ever said I had a problem with gay people. I don’t. My point in all of this is that my son lives with five women and one man. The women dominate. So the last thing I will do is encourage him to dress-up or particiapte in activities that may perhaps lean him toward being more effeminate.
And for the record here’s the definition of Effeminacy

The fact that I DON’T want my son to be like that doesn’t make me a bigot or hateful. But the fact you believe it does makes you an idiot!
Being effeminate doesn’t equal gay. Still I don’t want him to have feminine ways. And we all know in this society, wearing making, dressing up in princess clothes and painting our toes and curling our hair is considered feminine. So all I’m saying is FOR MY SON I won’t, won’t won’t instigate and do these things with him.
Now, if he grows up and chooses to do them on his own and ends up being a more feminine male or even gay, so be it, I will love my son no matter what. But hell, I’m NOT encouraging it. Call me what you want. But what you won’t do is control my thoughts. So with that said, CARRY ON!
And for all the haters, don’t bother commenting ova here like on Denene’s site because here I have the last word and I won’t be publishing your useless comments, but if you have something thoughful to add, I welcome it. 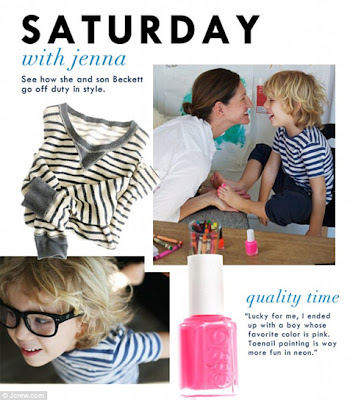 J. Crew Can Keep Its Pink Toenail Polish: I Want My Boy To Be A Boy

By KIA MORGAN SMITH
Just for farts and giggles, I sat my son Jo-Jo down, grabbed his little foot, took his big toe into my hands and started painting the little piggy that goes to market pink. And from the look on his face, he might as well have said, “Aww hell no momma. I’m Jo and I gotta go!” That spunky little boy of mine jumped up so fast he left a trail of pink polish smeared on me, the carpet and my favorite pair of blue jeans.

He wasn’t having it.

I don’t think his reaction has anything to do with the color of the polish or even the fact that I tried to paint his toes. Because let’s be real, he’s two and he doesn’t associate getting his toes painted with being a girl or a “girly” boy. It’s just that my boy is a rough-and-tumble, kick and karate kind of kid. It’s in him. He’s not gonna sit and do dainty things like patiently, calmly and delicately part and comb a doll’s hair like my girls do. He’s gonna take his Iron Man action figure and charge him through the air, and, while making all kinds of roaring noises, he’s gonna crash land his action figure smack dab into a ridiculously large pile of other toys I’ve bought him.

But is painting your son’s toes pink a big deal—some kind of new-fangled way to show just how progressive we parents can be when it comes to raising our little boys?

Well obviously it is for some.

By now, you must have heard the controversy surrounding a J.Crew Ad featuring a little boy with his toenails painted pink and a caption from his mom, a J. Crew executive, that read: “Lucky for me, I ended up with a boy whose favorite color is pink. Toenail painting is way more fun in neon.”

People are outraged. Even a number of psychiatrists say that our culture is being encouraged to abandon all trappings of gender identity. Others say it’s harmless fun and painting your kids toes pink doesn’t make a kid gay or give him the impression that he should dress in flamboyant drag like RuPaul—just like leaving them unpainted doesn’t make them any straighter. Amen to that.

From the looks of it, the little boy in the picture above seems to like pink polish on his little piggies. And if he does, then good for him and his mom. What works for them is for them.

But for me, a relatively open-minded mom, I’m just not that open when it comes to having my son actually walk around with neon-pink toenails and getting used to the idea of being primped and pampered like his sisters. In my house, we’re going to leave getting all pretty to the girls and save the Barbershop talk for the boys.

What I want to know, though, is this: What’s up with these clothing companies anyway? Are our children under attack? Just a few weeks ago, Abercrombie Kids advertised string bikinis with padded bras for girls as young as age seven. And now this. So, if I’m to read into this correctly, these clothing companies want 7-year-old girls to sex up bathing suits for their play dates by the pool and they want the little boys to be the belle of the ball?

Don’t get me wrong: I believe you have to let children be who they are. But at the same time, you can’t be so hands off that you are guiding them down a path that they’re not ready to travel or capable of traveling on their own. For instance, if you let your child climb behind the wheel of a car for a driving lesson and let her drive freely down the road knowing there’s a dangerous curve ahead that could send you both careening off a cliff, are you going to avoid warning her about it? Of course not! You’re gonna let her know to gently pull to the left because there’s danger on the right.

That’s all to say that parenting is about giving guidance and setting some boundaries. Kids can’t make all of their own decisions—somebody’s gotta be the teacher and somebody’s gotta be the student. And while under my tutelage, I don’t want my son getting his hair curled or toes painted or wearing dresses. I don’t. Because in this society, he will be judged harshly for not having a traditional “manly” look and decorum about him, and could easily find himself in all kinds of danger because of it.

Even though being transgender is a little more accepted now, life is still not a bowl of cherries for most of those who live the life. It’s tough. And no mother wants her child to grow up struggling because the world is close-minded and hateful.

Of course, I will accept my child for who he is, no matter if he’s a boy who acts like a manly man or one who prefers pink toenails. But I’m not going to instigate the latter by openly cheering him on if he wants to dress up in princess dresses and lipstick like his sister and pose with his hand on his hip, pretending to be like me. I want a man to be a man with no remnants of a woman at all. Not even for a minute.

I’m just glad I’ve got a Tim Allen-grunting, Tool Time- type of guy for a husband, and I’m glad my son looks up to his dad and likes to walk around trying to tinker and fix things rather than worrying if his butt looks too big in an A-line skirt.

I’m not gonna let my son paint his toenails or act more like a girl than the boy he is. Sorry. Say what you will. I’m not gonna do it.

And you know what? I am damn glad Jo-Jo didn’t let me do it.

My family and I got to see a sneak peek of the amazing Cirque De Soleil show Totem here in Atlanta through December 30th that ...

Saturday was sizzling with six grill masters cooking up chargrilled treats on their grills outside of Lenox Mall. All for a grilling good at Macy’s ...