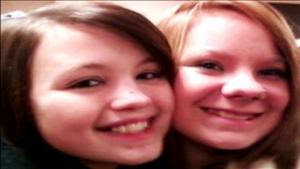 They were 14-year-old typical teens who loved life, Facebook, and their friends.
But much like teenagers Haylee Fentress & Paige Moravetz had their fair share of problems at school. Haylee moved to a new town in Indiana and attended  a new school. Kids taunted her about her weight and her red hair. She was bullied and humilated and even though it seemed like no one liked Haylee, Paige was her one and only true best friend.

And they remained friends until death did them part.

The two girls were so overwhelmed by the constant bullying at school, the seething hateful name-calling, the mocking, endless disrespect from their peers and the persistent fights, the girls made a suicide pact and hung themselves. To them, suicide must have seemed like the only way to get away from the problems that just would not end at school.

It’s a shame when kids like these can’t find a way out or feel like no one will help stop the taunting they endured.

One of the girls, Paige, got into a fight and her friend Haylee was expelled for trying to help defend her friend.
What we know is kids can be cruel. And even in adulthood bullying can persistent. I, in fact suffered bullying in school when I was young. I even was attacked as an adult just a few weeks ago when I wrote an article that some people didn’t agree with.

The sad thing is adults don’t seem to think they are bullies when they badger other adults but it’s all the same.

This reminds me of my early years in middle school when I was heavily bullied too.
I was bullied and picked on during all my middle school years and even a bit in elementary school. The bullying I suffered was severe.

I was extremely skinny and small. I wore a jerri curl and got teased just like Haylee was teased for having red hair. I didn’t have the long flowing hair like some of my peers and because my skin was brown and not light-skinned that was another factor that made me an easy target to pick on. Where I grew up, being light, bright and with long hair was a recipe for popularity. I was “nappy-headed” brown, skinny and regularly called ugly. And that was a recipe for perpetually being picked-on.

The bullies would constantly call me names, they would threaten to beat me up after school and sometimes succeed, if I didn’t run. Once I even had a boy beat me up bad on a bus for no reason at all. Kids would taunt me over and over just because. I remember another time a girl just walked up to me and slapped me in the face. I probably was too ugly to look at in her eyes.

I have so many horrible stories that I truly can’t describe them all here. And because I wanted to fit in, because I wanted so bad for this bullying to stop, I started hanging out with some bullies because I feared if I didn’t I would in fact continue to get beat up.

The bullies I hung with would pick on other kids and “bum rush” them and beat them up. I would go along with them and would be glad it wasn’t me. I felt like I didn’t have a choice. Nobody helped me when I was bullied. So I figured if I couldn’t beat ’em, join ’em. I felt the pressure to save myself from that kind of daily beat down and humiliation.

By the grace of God, I kept fighting the boys while they hit and beat me. They never got my clothes off and never raped me, but the experience was horrific. I was 14 years old. I didn’t get out of that house until 3 a.m. and of course when I got home my mother was looking for me and pretty upset because I was out so late, even though it was against my will.

These same boys were known in the neighborhood for raping and beating up girls in Southwest Philly. This is where I lived so I ran into them often. I remember one summer I was walking down the street and one of these boys smashed an egg on the side of my head for no good reason. I remember another time these boys were beating me and my friends up in the street and a stranger stopped his car, grabbed us, put us in his car and drove us home.
And people wanna know why I moved my precious daughters and son out of the hood? This is the taunting I suffered as a youth in SW Philly and this ain’t the half of it!

Needless to say, I realized that that girl, the bully, the one who let the boys lock me in a room, the one who always acted like she was my friend and like she was protecting me, was truly an enemy and didn’t give a damn about me. I stopped hanging with that girl and avoided her at all cost. And it was no surprise when she got pregnant by one of those violent boys when she was in fact 15. And he used to beat the living daylights out of her too.

And when I got out of middle school, I begged my mother to send me to a different high school than all the other bullies were going to. And she did. And thankfully my high school years were pretty positive.

In the hood, principals don’t seem to care, teachers barely want to be there and most times parents are too busy with their own life problems to sweat the small stuff. My mom did care and many times she would come up to the school. But she couldn’t sit in class with me. And even though I had those bad moments, it wasn’t as bad as it could have been because once hoodrats learned that I was the sister of “Phil and Shawn” as they were called, a lot of people left me alone. My brothers were popular guys in our hood.

But these girls Haylee and Paige, must have felt like they didn’t have anyone to protect them. The things I suffered was probably enough to drive me to do the same thing they did, but I never thought about killing myself. I always thought about getting out of the hood. But you never know what goes on in the mind of a troubled teen.

I just wish Haylee and Paige would have given life a chance, even though their life seemed hopeless to them. Had I decided to commit suicide because of the bullying I endured then I would never know of the beautiful gift of life I have now. I was able to get out of the hood, go to college and prevail. I was able to pursue my dreams, a  wonderful career as a writer, and ultimately have the family and husband that I always dreamed of.
It’s unfortunate that Haylee and Paige will never be rewarded with those good fortunes.

And for my children, I was able to move them somewhere they don’t have to worry about bullies busting them in the head with an egg. Yes it can happen anywhere. Bullies are everywhere. But if it does happen in our neighborhood, they can ensure that my husband and I will seek out justice, a restraining order, and have the bullies arrested and jailed for perpetrating any kind of offense against our daughters. There will be no tolerance for bullies ova here. And if there is a problem at school, it will be dealt with. All my kids have to do is say the word. And we have coached them and they know to tell us if they are being bullied.

I am passionate about making sure my children are NOT bullied because of what I suffered. I know the pain. I know how the dreadful memories persist, and I know the feeling of just wanting it all to end.

We all have to stand up to bullies. And even in adulthood, we can’t co-sign when a bully takes a bite out of someone. Let’s stand up and take bullies down so that other young people don’t suffer. They need to live to see the beauty in wanting to be here.

Every year it never fails I can never decide just what to get my husband for Father’s Day. I’m sure some new power tools with ...

OK, so as a tribute to my already spoiled kids, I have decided to start Family Night. Now, I am by no means the perfect ...

Just the other day I ranted.Maybe someone saw it and decided to “say a little prayer for me…” (singing in my Dionne Warwick voice)Anyway, I’m ...

Time will tell and this Sunday we will certainly see who actually is the explosive one on the Celebrity Apprentice. We all know that Nene ...