REVIEW: For Craig Robinson, Parents Were Key Players in Building His Character 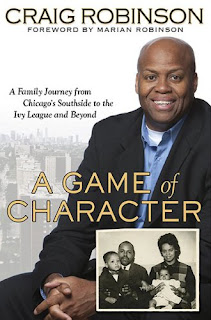 What does it take to build character in your children?

Fraser and Marian Robinson were a tough-and-tender parenting tag team who mastered the art of child-rearing in the Robinson household. A loving team who coached their children Craig and Michelle Robinson to excellence by instilling in them that love, respect and family are major players in the game of life. And those values and their teachings would take them a long way .

Craig Robinson and his sister, now Michelle Robinson Obama, learned to be remarkable early on in life. Craig learned to read by the age of four and skipped the second grade with ease. And by the time he reached high school, Ivy League eyes were already on him. This was rare for a black man living on the Southside of Chicago to rise up and outrival his peers at a time when there was much crime, drugs on every corner and social and civil unrest surrounding him in the 1960s.

Robinson, the brother of First Lady Michelle Obama chronicles these heartfelt lessons of character which shaped him into a successful businessman and stellar coach, in his book, A Game of Character- A Family Journey from Chicago’s Southside to the Ivy League and Beyond (Gotham Books; Paperback; May 3, 2011; $16).

The story is a moving and heart-warming narrative of Robinson’s passage from the Southside of Chicago to Princeton University and later a Head Coach at Brown and a vital component to his brother-in-law Barack Obama’s Presidential campaign. I was especially moved by Robinson’s artful storytelling about his loving and ever-supportive parents. As a mom of four daughters and one son, I was intrigued and inspired by the uplifting relationship Robinson had with his late father Fraser and still has with his mother Marian.

“True character is a quality that can be found everywhere and anywhere, in some of the least likely places,” Robinson writes.

Robinson details how through example his father and mother molded him and Miche’ as he playfully called his little sister. His parents modeled excellence, not mediocrity. They demonstrated their own quest for knowledge through reading newspapers and books that fed their own curiosity. He dad got up early and showed him the importance of being prompt. There were impromptu talks and what Robinson called spur-of-the-moment adventures, where his father would take him for classic Sunday afternoon drives around the neighborhood and a ride down memory lane.

There is an especially poignant quote from Robinson’s father that I love and will now adopt. As Robinson struggled as a youth to understand why people would always act ignorant or mean, his father told him to put himself in their shoes and try to understand them instead of writing them off.

Robinson was a tall, lanky kid who fostered a love for basketball early on. He even played street ball against greats like Michael Jordan. Even though he was tall, Robinson said there was no pressure from his parents to play a certain sport or to focus solely a certain specialty or career. As parents Marian and Fraser Robinson respected their children and cultivated them enough to let them make their own choices. They in fact believed in the power of their parenting enough to allow their children to just be. There was one stipulation though: whatever they chose to be, they had to be the very BEST at it.

I could truly go on and on about the indelible lessons Robinson and his sister Michelle learned from their parents. This book is just as much a blueprint about successful parenting as it is about character.

Later on, it was Robin’s father who insisted that he attend Princeton University because it was an Ivy League school with a top-notch reputation, instead of the University of Washington or Purdue University, which offered scholarships and major conference play.

Robinson was later influenced by Princeton coach, the legendary Pete Carril to leave basketball. He had played professionally in Europe but made an about-face to earn his M.B.A. in Finance from the University of Chicago Graduate School of Business in 1992 and pursue a career in the competitive field of finance.

But Craig had deferred his real dream long enough. He left the world of finance to become a basketball coach. Prior to joining Oregon State, Craig spent two years as head coach at Brown, leading a revival of the Bears’ program. He won more games in his first two years than any other head coach in Brown basketball history and was named Ivy League Men’s Basketball Coach of the Year by Basketball-U.com where he developed and implemented his local, national and international recruiting technology.

Robinson uses basketball as a metaphor for life. He shares the lessons he learned about what it takes to succeed and more importantly, what it means to have character.

This book is a great read/ I love that there are so many wonderful lessons about how his parents shaped him and Michelle. His dad lit his competitive flame and both his parents demonstrated brilliance at every opportunity, taught with conviction, modeled with integrity and taught the Robinson children to strive for excellence in all things.

It’s no wonder we have such an amazingly intelligent First Lady of the United States! She comes from great stock! To be a great parent and to raise scholars like Craig and Michelle, you truly have to be invested at every stage of your children’s development.

The fundamentals that Robinson learned from his family are evidenced today in his coaching style and family life. Craig Robinson currently lives in Oregon with his life Kelly and his children.

I am giving away a copy of A Game of Character. Simply leave a comment on this post and you are automatically entered! You have until Friday May 27th to enter for your copy.

POSTED IN » Books, News and Features

I’m going GA-GA because Goony Goo-Goo is coming soon to YOU!

Oh my! I’m going GA-GA!! As the release date of my first children’s book, Goony Goo-Goo and Ga-Ga Too, draws near, I just can’t contain ...