cincomom June 23, 2011 Comments Off on I Got that Hollywood Swag Going on: My Disney/Pixar Cars 2 Goody Bag! 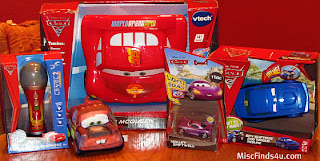 Remember when just about every little girl carried a Cabbage Patch doll and Tickle Me Elmo was on every little kid’s wish list? Well something tells me that this holiday season it will be a McQueen and Mater Cars 2 takeover because Disney and Pixar have got some really cool toys rolling out and racing into toy stores. And I snagged some of these toys courtesy of Disney Consumer Products and I must say that I was wowed.

Let me tell you about some of the things I received in my Disney swag bag: 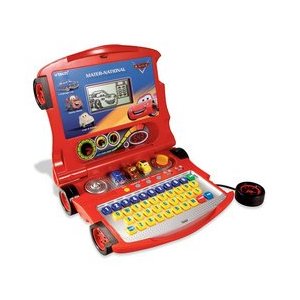 I have to mention one of the coolest things in the bag was, by far, a car that converts to a laptop computer when you pop the hood. It’s a Cars 2 Lightening McQueen Laptop and it is bad, as in good, and the most adorable laptop computer ever. It has a QWERTY keyboard and a cute tire-shaped mouse, which adds an additional element of fun. This will be a very popular item for sure. You would never know this is a kiddie laptop because of the look of the car. And then when you open it, there are 3 car buttons- Mater, Finn McMissile and Holley Shiftwell. And each corresponds to a learning area. Your child can choose a learning activity in Mechanical Math, Speedy Reading, or Spy Logic and Games. The headlights even light up! I just LOVE this computer. Of course my son grabbed it right up when I came home, so now he can travel the learning superhighway in style.
My son loves it but has no idea what he doing! (Maybe he does…) 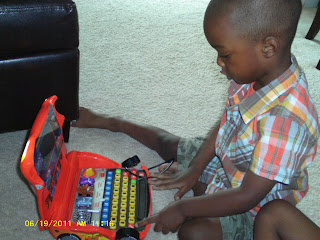 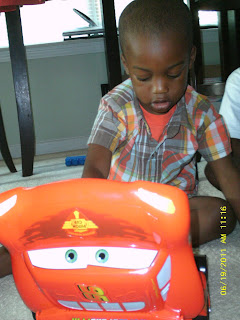 My son loves cars small enough to fit in his little hand. These cars have working headlights, realistic sounds and hilarious phrases from the movie. The characters include: Finn McMissile, Lightning McQueen, Mater, Francesco and more.

This is a cool car and shifts shape when you press a button so the car changes transforms into “spy mode” Just like in the movie, the characters reveal spy gadgets, secret weapons and more.

Just Play Products
Because my son is still in the mode where he likes to throw things at my head (and a die cast car upside the head can hurt), it was especially nice to see this plush toy in the bag.
Whether tossing ‘em, slamming ‘em, or crashing ‘em, you will have a blast with these interactive, plush cars. And if your two-year-old decides to throw it at your head too, it won’t hurt at all.

First Act
My 4-year-old grabbed up this phone and started singing like a little rockstar!
It’s a cordless mix with built-in speaker. McQueen says 3 lines from CARS 2. The mic includes Car sound effects and on/off button. And 3xAAA batteries required (not included).

If I were you, I’d grab up these toys early in the season because they are REALLY cool and probably will be sold out by fall, especially the Lightening McQueen Laptop. My friend Connie Ott at MiscFinds4U.com is giving away the WHOLE bag. So head over there and sign up. Sorry but my kids tore into the bag as soon as I got home! Thanks Disney!

(Disclosure: All opinions expressed in this review are my own and were not required as part of the gifting package)

#Maleficient New Poster and Trailer – The Curse Has Been Broken!