cincomom March 6, 2013 Comments Off on Test Your Wreck-It Ralph Skills!? Game on! The Blu-ray DVD has been released! Wreck-It Ralph has been released on Blu-ray Combo Pack!
Are you and your family ready to test your bad guy skills? First check out the behind the scenes clips straight from Bad-Anon meetings to get inside the bad guys’ heads. Then flex your memory muscles in the character quote match-up! Now that you’ve proven yourself, get creative and design your very own bad guy! Feeling like a winner? Check out the Ultimate Wreck-It Ralph Quiz below! 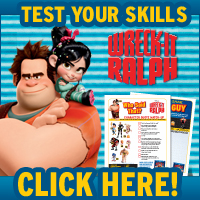 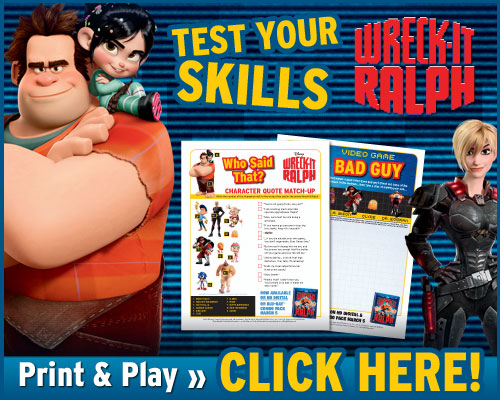 Calling all fans of Wreck-It Ralph! Think you know the arcade-hopping adventure inside out? Well, put yourself to the test with this ultimate quiz on the animated action…

This section includes random questions on the hit movie and its video game characters. Put your thinking cap on and get to work!

In what year was the arcade game Fix-It Felix Jr. first plugged in?

How heavy is Ralph?

In the movie, Ralph attends a special meeting alongside Zangief and Bowser. What’s the name of the group?

What is the color of Ralph’s eyes?

At one point in the story, Ralph meets an orange ghost from PAC-MAN. What is the ghost’s name?

After his meeting, what colorful fruit does Ralph take back to Game Central Station?

Ralph gives a piece of fruit to an arcade character in Game Central Station. Who?

Who does Fix-It Felix, Jr. think will be fashionably late to the penthouse party?

What is the name of the Nicelander that made the party cake?

How many quarters do you need to play Hero’s Duty?

Can you name the arcade in the movie?

What word is written on the medal from Hero’s Duty?

Can you name the candy-cart racing game in the movie?

Who is the ruler of the kingdom made entirely of candy?

What color is Sour Bill?

What’s written on the mat outside the candy castle?

Who is the best man at Fix-It Felix, Jr.’s wedding?

Can you match up the movie quotes with the correct characters from Wreck-It Ralph? You know you can do it!

“Standby… My Q*Bert-eze is a little rusty!”

“The code is the sweet lifeblood of the game!”

How well do you know the characters, cast and crew of Wreck-It Ralph? Find out by answering these tricky teasers… Good luck!

Can you name the actor who provides the voice of Ralph in the movie?

Who is the Director of Wreck-It Ralph?

What is the full name of the Sugar Rush character voiced by Sarah Silverman?

What color is Q*bert?

Which American actor provides the voice of Fix-It Felix, Jr. in the movie?

QUESTION NINETEEN: A vomit and a burp!

HOW DID YOU DO?

If you correctly answered 0-10 questions…

Uh-oh! You’re not the most sharp-eyed viewer of Wreck-It Ralph – but don’t let that put you off. Why don’t you watch the movie a few more times and take the test again? We’re sure you’ll beat your old score with ease next time. Good luck, gamer!

If you correctly answered 11-20 questions…

Great work, arcade fan! When it comes to the video games of Wreck-It Ralph, you’re not quite on the high score board – but you’re definitely on your way to the top. Want to power up and see if you can do better next time? Go on, you know you can do it…

If you correctly answered 21-30 questions…

Congratulations on your amazing high score! Are you best friends with Ralph, Vanellope and Felix? Well, you should be with your expert knowledge of the movie. You’ve earned a top spot on the leaderboard hall of fame for your efforts. Game on!

The Walt Disney Studios’ earned 17 nominations!!! Lincoln received 12 nominations including Best Picture and is the most nominated film of the year! Brave, Frankenweenie, ...