Farewell to a Phenomenal Woman – Maya Angelou Dies at Age 86

cincomom May 28, 2014 Comments Off on Farewell to a Phenomenal Woman – Maya Angelou Dies at Age 86

Maya Angelou was indeed a phenomenal woman who rose from the ashes of pain and distress, rape, hurt and humility to rise and become one of the nation’s most beloved literary voices of our time.

Today the nation lost Maya Angelou, but we still sing her praises for what she taught us all. She taught every woman to BE phenomenal, rise above the fray and don’t be afraid to be abnormal. At least that’s what she taught me.

Maya Angelou died at her home in Winston-Salem, North Carolina, on Wednesday, said her literary agent, Helen Brann. Angelou had been “frail” and suffering from heart problems, the agent said.

Angelou’s legacy is twofold. She leaves behind a body of important artistic work that influenced several generations. But the 86-year-old was praised by those who knew her as a good person, a woman who pushed for justice and education and equality.

In her full life, she wrote staggeringly beautiful poetry. She also wrote a cookbook and was nominated for a Tony. She delivered a poem at a presidential inauguration. In 2010, President Barack Obama named her a recipient of the Presidential Medal of Freedom, the country’s highest civilian honor.

She was friends with Malcolm X and the Rev. Martin Luther King Jr. and inspired young adults and world celebrities. 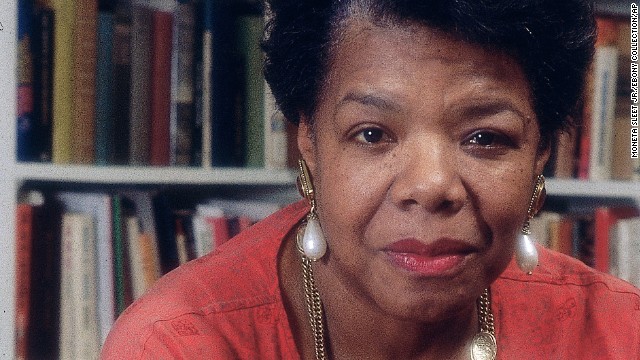 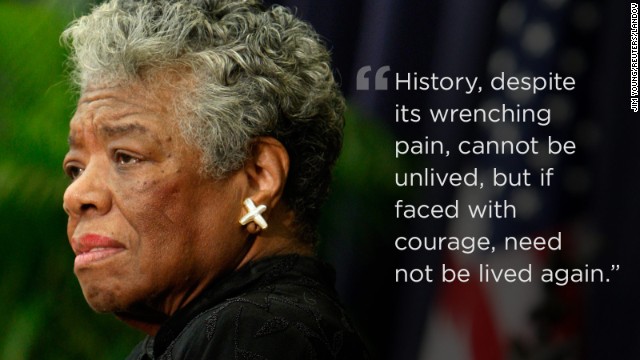 Maya Angelou: In her own words

She sang calypso. She lived through horrors.

Her lasting contribution to literature, “I Know Why the Caged Bird Sings,” bore witness to the brutality of a Jim Crow South, portraying racism in stark language. Readers learned of the life of Marguerite Ann Johnson (Angelou’s birth name) up to the age of 16: how she was abandoned by her parents and raped by her mother’s boyfriend. She was homeless and became a teen mother.

Its publication was both daring and historic, given the era of its debut in 1969.

“All of the writers of my generation must honor the ground broken by Dr. Maya Angelou,” author Tayari Jones posted on her Facebook page Wednesday.

“She told a story that wasn’t allowed to be told,” Jones said. “Now, people tell all sorts of things in memoir, but when she told the truth, she challenged a taboo — not for shock value, but to heal us all.”

Black American novelist Julian Mayfield is said to have described the autobiography as “a work of art which eludes description.”

“I Know Why the Caged Bird Sings” was an international bestseller and nominated for a National Book Award in 1970.

“If you want to know what it was like to live at the bottom of the heap before, during and after the American Depression, this exceptional book will tell you,” hailed British critic Paul Bailey.

The book became a mainstay of student reading lists, much to the chagrin of some authorities. The book has reportedly been banned numerous times.

Angelou’s mastery of literature trumped those who tried to keep her down. She knew that storytelling always won in the end.

“I want to write so well that a person is 30 or 40 pages in a book of mine … before she realizes she’s reading,” Angelou once said.

On Wednesday, people of all ages and backgrounds took to social media to say what her life’s work meant to them.

Adrian Sean of Detroit posted a CNN iReport tribute, saying, “I cannot describe the feeling I had when I read ‘I Know Why the Caged Bird Sings’ for the first time, and knew someone else in the world had been through extreme hardships just as I had.

“She not only survived, but she thrived just by being herself,” she said. “Maya Angelou was and still is a teacher, a mentor, and a friend to me. Her impact on my life will always have a special place in my heart.”

From dropout to Dr. Angelou

Angelou spent her early years studying dance and drama in San Francisco, but dropped out of school at age 14.

Angelou later returned to high school to get her diploma. She gave birth a few weeks after graduation. While the 17-year-old single mother waited tables to support her son, she developed a passion for music and dance, and toured Europe in the mid-1950s in the opera production “Porgy and Bess.”

In 1958, Angelou become a part of the Harlem Writers Guild in New York and played a queen in “The Blacks,” an off-Broadway production by French dramatist Jean Genet.

“I created myself,” Angelou once said. “I have taught myself so much.”

Angelou spoke at least six languages and worked as a newspaper editor in Egypt and Ghana.

Affectionately referred to as Dr. Angelou, the writer never went to college. But she has more than 30 honorary degrees and taught American studies for years at Wake Forest University in Winston-Salem.

One thing I know is that I really like Rashan Ali. She’s the down-to-earth host of Ladies Night TV and most recently when my favorite ...

Atlanta Diaper Relief is having its first Charity Benefit to raise money for families who need diapers and we’d like for YOU to join us! ...

Melissa & Doug want you to tell them which of their educational toys you think is the best! Just click on the image below to ...